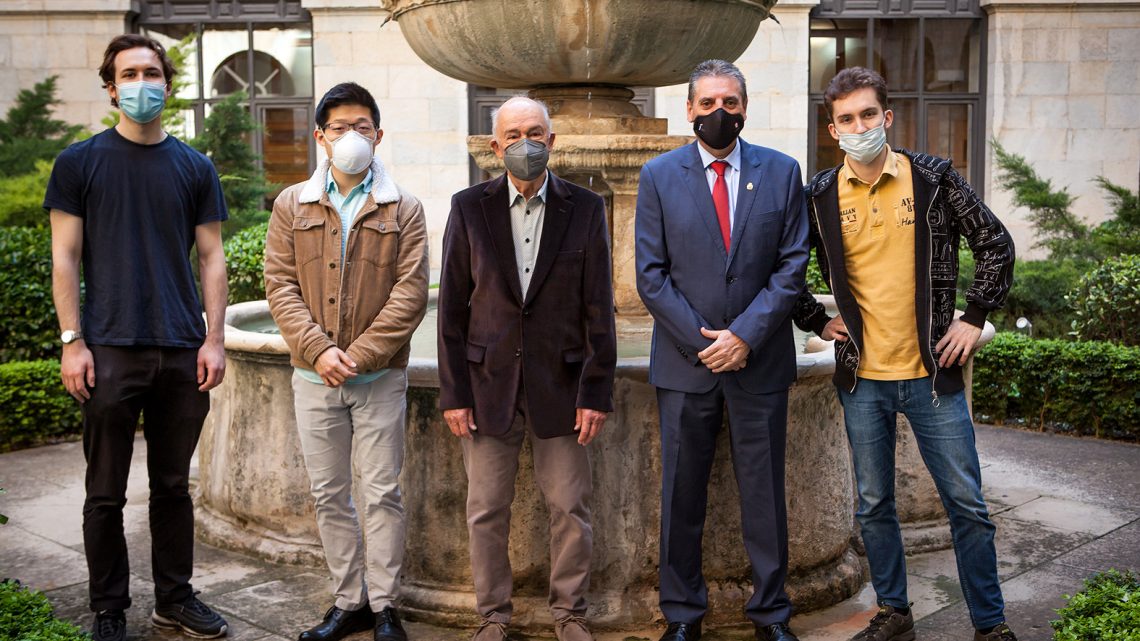 Tomorrow, the Russian Valentin Malinin, the British Dominic Doutney and the Taiwanese Po-Wei Ger will set their names in the list of winners of this musical contest held by the City Council.

The three finalists of the 62nd edition of the Jaén International Piano Competition have agreed today in highlighting the good organisation of this musical contest, organised by the Provincial Council, despite the difficulties of it being developed during this time of pandemic. This has been one of the main ideas that the Russian Valentin Malinin, the British Dominic Doutney and the Taiwanese Po-Wei Ger have expressed during their public appearance today, together with the deputy for Culture and Sports, Ángel Vera, and the president of the jury of this award, Albert Attenelle.

In this act, Vera has stressed that it has been “a very special edition due to the sacrifice and effort of the participants, juries, hostesses, technical personnel and the staff from the Culture and Sports area, who have dealt with antigen tests, antibodies, restrictions and other protocol issues that have been necessary to carry out this event, enabling us to enjoy one of the most important artistic expressions held in our province”. Along these lines, he pointed out that “we have been able to demonstrate that culture is safe, giving continuity to our cultural programming and thus supporting one of the sectors that is experiencing the worst during the pandemic.”

These three pianists will get the main awards of this contest, in a final that is taking take place tomorrow at 6:00 p.m. at the New Infanta Leonor Theatre. They will perform with the Málaga Philharmonic Orchestra, conducted by Salvador Vázquez. The concertos will be held “with a limited capacity, about 375 people, who will occupy all the seats that have been put up for sale, but there will be many more enjoying these concerts online, as they will be broadcast on the YouTube channel of the City Council”, explained the deputy for Culture and Sports, who pointed out that this “puts an end to ten magical days in which there has been only one protagonist, the piano ”.

Ángel Vera wished “all the luck in the world” to the three finalists, who will compete for a first prize endowed with 20,000 euros, the recording of an album with Naxos and a tour of ten concerts, as well as a second prize of 12,000 euros sponsored by El Corte Inglés and a third award of 8,000 euros financed by the Unicaja Jaén Foundation. The deputy concluded by addressing these three interpreters, “you are part of the history of this piano competition and you are ambassadors of this land that is mainly known for olive oil, but also for this musical contest” .

A contest whose jury has been chaired one more year by Albert Attenelle, who also highlighted that “the longevity and good health of the contest” is reflected in the fact that “despite the difficulties, this year we had an astonishing registration of participants, a record”. This is proof of “its vitality and also the interest it arouses everywhere”, he added, before thanking “the efficient and enthusiastic care to the detail of the City Council so that the award could be celebrated”, as well as “their support to contemporary music, which is an identifying feature of this contest”. In this regard, Attenelle has specified that “this year the commissioned work was not compulsory to play, but despite this it has remained alive and we have been able to listen to it in the second round without any problem”.

Finally, the three interpreters, who after this public appearance have traveled to Málaga to rehearse with the orchestra that will accompany them in the final tomorrow, have shown their satisfaction to be in this final stage. The Russian Valentin Malinin has pointed out that “it is great to be able to play the piano again on stage” and has been “delighted” with the city. Briton Dominic Doutney spoke of “a great experience, starting from the fact that I was able to leave London for a few days.” Regarding the organisation, he added that “everything has gone really smoothly” and said “I wish it was Saturday already”. Finally, the Taiwanese Po-Wei Ger has also said that his participation in this contest has been “a fantastic experience because it has allowed me to play live again” and has declared that he has “loved the food and also the organisation has been very kind ”.