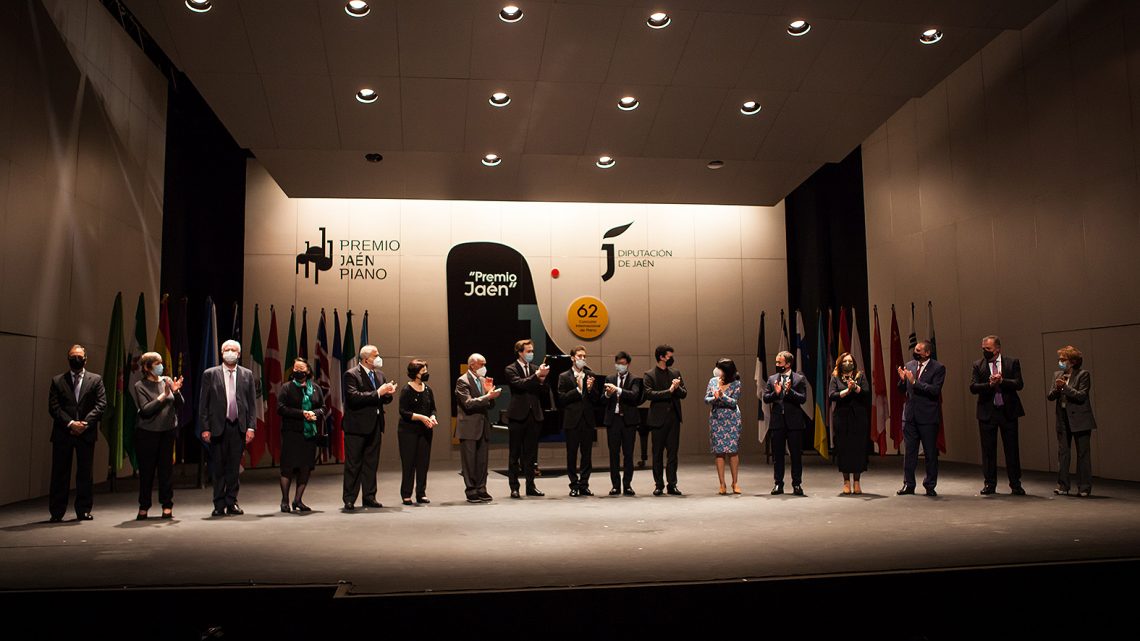 The Taiwanese Po-Wei Ger and the British Dominic Doutney have completed the list of winners of this prestigious event, held at the New Infanta Leonor Theatre

The Russian pianist Valentin Malinin has won the 62nd edition of the Jaén International Piano Competition, organised by the Jaén City Council, thanks to his interpretation of the concerto for piano and orchestra number 1 in B flat minor Opus 23, by Tchaikovsky during the final of this contest, which was held today at the New Infanta Leonor Theatre in the capital of Jaén. The performance of this pianist has been, in the opinion of the jury, chaired by the Barcelona pianist Albert Attenelle, the best of those performed by the three young contestants who participated in this final, in which they have been accompanied by the Málaga Philharmonic Orchestra, conducted by Salvador Vázquez.

The first vice president and deputy for Equality and Social Welfare of the City Council, Francisca Medina, has been in charge of handing over  the award to the winner of this contest, endowed with 20,000 euros contributed by the provincial Administration, in addition to a Gold Medal and a diploma, the recording and publication of an album with the prestigious Naxos label and a tour of ten concerts.

With this award, Valentin Malinin becomes the seventh Russian interpreter to put his name in the list of winners of this contest, the second in a row after the victory of his compatriot Alexander Koryakin in the last edition, that of 2019. In this way, this young performer, born in 2001, adds this important distinction to those in “Ferruccio Busoni” contest and in different national competitions in Russia.

After his performance in this final, the second award went to the Taiwanese Po-Wei Ger, who performed Beethoven’s Concerto for Piano and Orchestra No. 4 in G major Opus 58, endowed with 12,000 euros sponsored by El Corte Inglés. The third prize, endowed with 8,000 euros and sponsored by the Unicaja Jaén Foundation, has gone to the British Dominic Doutney, who played the concert for piano and orchestra number 1, in D minor Opus 15, by Brahms.

Along with the three main awards of this international competition, other awards were given by the sub-delegate of the Government in Jaén, Catalina Madueño; the mayor of Jaén, Julio Millán; the deputy for Culture and Sports, Ángel Vera; the president of the Unicaja Jaén Foundation, Carmen Espín; the person in charge of Communication and Institutional Relations of El Corte Inglés, Miguel Sainz, and the president of the Association of Friends of the Jaén de Piano Prize, Juan José Mudarra. The first one of them, the one dedicated to contemporary music and endowed with 8,000 euros contributed by the Jaén City Council, has gone to the Dutch pianist Aidan Mikdad, who stayed at the gates of the final of the 62nd Jaén Piano Competition. The work was composed by Sebastián Mariné, entitled “I Kneel”.

The Rosa Sabater award, which is awarded to the best interpreter of Spanish music and which has an endowment of 6,000 euros paid by the City Council of the capital of Jaén, and a concert organised and sponsored by the Royal Economic Society of Friends of the Country, went to the Spaniard Leo de María.

The Taiwanese pianist Po-Wei Ger has won, in addition to the second award of this competition, the Chamber Music Prize, sponsored by the Ministry of Culture. This recognition has an economic endowment of 6,000 euros. Po-Wei Ger has also won the Audience Award, given by spectators attending this final stage and for which he has received a bronze sculpture alluding to a piano delivered by the Association of Friends of the Piano Award.

The award ceremony has put the final touch to the 62nd edition of this contest, which has been resumed after the cancellation of last year due to the pandemic and which has been held considering all the necessary security measures to guarantee the security of both of the participants as well as the public.