The 62nd Jaén International Piano Competition returns to the cultural program from April 8 to 17, with a record number of registered pianists 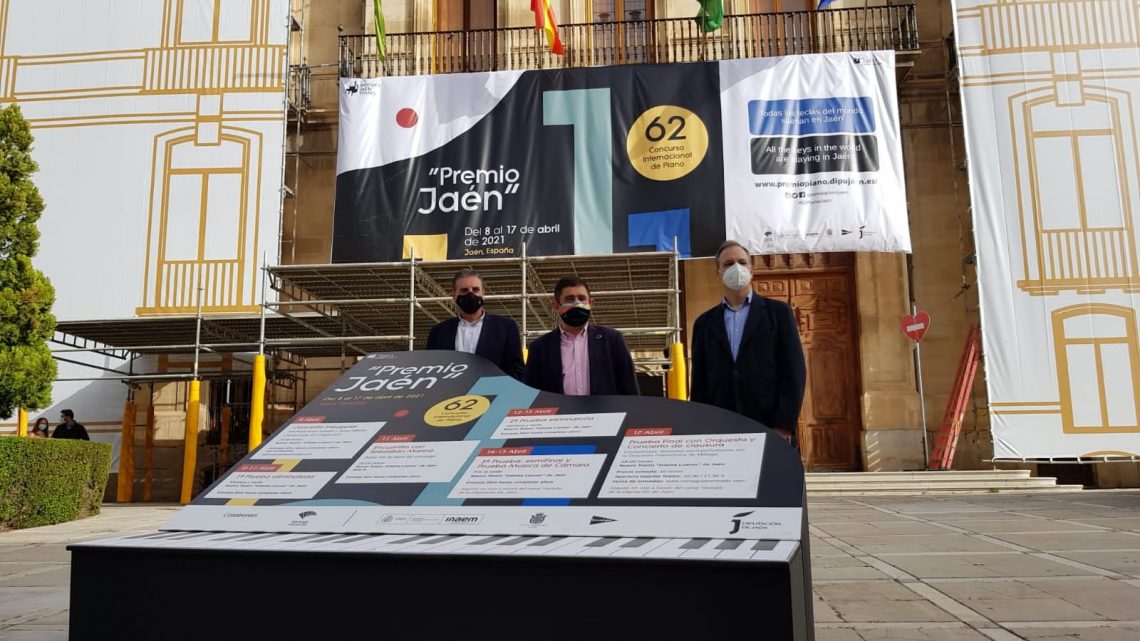 The City Council is back with the contest, featuring the Málaga Philharmonic for the first time in the final and which will broadcast its last two rounds online

The Jaén International Piano Competition returns to the Jaén cultural agenda from April 8 to 17 with the celebration of its 62nd edition, in which a record of registered pianists has been reached, with a total of 89 contestants from 28 different countries of the five continents. The Jaén City Council has resumed the organisation of this event –suspended last year due to the Covid-19 pandemic– which “is one of the most important cultural activities, with the greatest prestige and projection of those carried out in the province ”, said the president of the provincial administration, Francisco Reyes, who presented the competition today.

Reyes, sided by the deputy for Culture and Sports, Ángel Vera, and the secretary of the jury of this contest, Ernesto Rocío, has remarked that the organisation of this edition “responds to the commitment that we have been making from the local Administration, taking into account the restriction measures, to give continuity to the cultural programming in this province and to bet on this sector ”.

Accordingly, the president of the City Council has stressed the importance of giving continuity to the usual cultural programming because “we consider that culture is fundamental for the development and training of people and is also essential for the creation of wealth and employment”. He added: “ it has been proved throughout these months that cultural activities are safe despite the pandemic, always complying with the criteria established by the health authority in each territory, which we will scrupulously follow in the celebration of this event ”.

The Infanta Leonor Theatre, with a limited capacity of approximately 340 seats due to sanitary restrictions, will be the setup of all the appointments and the different qualifying rounds of this edition, which will begin on Thursday, April 8, with the draw of the order of intervention of the contestants, in which the number of definitive pianists competing in this award will be announced, to which 89 pianists from 28 countries on 5 continents have registered. Of these, 54 come from Europe – the majority from Spain, with 14, followed by France and Russia with 8, and from Italy with 7–. In addition, 22 pianists have registered from different countries in Asia, 11 from the American continent and there is a contestant from Algeria and another one from Australia.

After the draw, the opening concert will take place on Thursday, April 8, for which an invitation is required. It can be downloaded in the coming days at www.consiguetuentrada.com. This performance begins at 8:00 pm, given by the prestigious Croatian pianist Ivo Pogorelich, who will be performing works by Chopin and Ravel.

Likewise, the first eliminatory round of the contest will take place between April 9 and 11, and the second, on 12 and 13. The semifinal – dedicated to chamber music, with the participation of the prestigious Breton Quartet – will take place over two days. That is, on April 14 and 15. It will also be the first time that the final of this contest takes place on Saturday – April 17 – and that this test has the participation of the Málaga Philharmonic Orchestra, directed by Salvador Vázquez, something that has allowed  the contest to expand the repertoire of works established in the final, with pieces by Brahms or Tchaikovsky, among others.

Both this last round, whose tickets will be sold at www.consiguetuentrada.com, and the semifinal, will be broadcast for the first time through the Youtube Channel of the Jaén City Council – www.youtube.com/user/ diputacionjaen- with the double goal of “on one hand, ease the difficulties of not being able to count with the full capacity of the Infanta Leonor Theatre and, on the other, to increase the diffusion of this event beyond our borders”, Francisco Reyes pointed out. He stressed that with this broadcast “we turn a problem like the pandemic into an opportunity, an opportunity to make this contest more universal, which can be followed live from anywhere in the world through Internet.”

The Spanish pianist Albert Attenelle will once again lead the jury of this event, which will finally be made up of pianists and concert performers from four different countries – Pilar Bilbao and Juan Miguel Moreno Calderón, from Spain; Hortense Cartier-Bresson, from France; John Salmon, from the United States; and Michiko Suda, from Japan, as well as the pianist Ernesto Rocío.

The first prize of this edition will consist of 20,000 euros, apart from  the recording of an album with Naxos and the possibility of a tour of 10 concerts, whose dates and venues are yet to be determined according to the evolution of the pandemic. The second award will be endowed with 12,000 euros, and the third, sponsored by the Unicaja Jaén Foundation, will consist of 8,000 euros. They are joined by the Chamber Music Award, of 8,000 euros; the Rosa Sabater Award, of 6,000 euros, sponsored by the Jaén City Council and awarded to the best interpreter of Spanish music. Finally, the Contemporary Music Award, also with 6,000 euros. The Ministry of Culture sponsors this award, which is given to the best interpretation of  the work that has been especially composed for this contest and which in this 62nd edition is entitled “I kneel” and has been composed by the Granada-born composer Sebastián Mariné.

Due to the current pandemic, there will only be two side activities to the contest: the meeting with the composer of the commissioned work for the Piano Competition -which will take place on April 11 at the Infanta Leonor- and the celebration of recitals around the province, given by the pianists who do not reach the final, as explained by Ernesto Rocío.

The Jaén International Piano Competition will be “the first to be held in Spain again since the beginning of the pandemic,” said Rocío, who has highlighted that this competition “is a benchmark for contestants, since winning here is still very important at an international level ”, which explains the total of 89 pianists that have signed up for this 62nd edition.