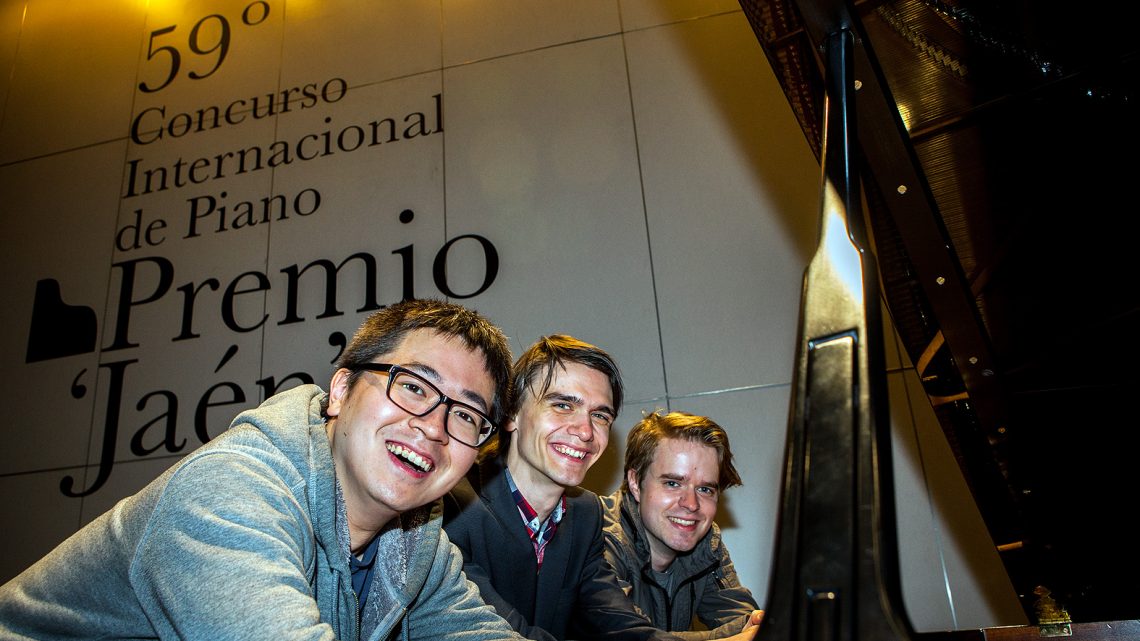 The final will be celebrated on Friday 28, from 19:00 at the Infanta Leonor theatre

The German Leon Bernsdorf, the Russian Dmitry Mayboroda and the Chinese Chun Wang are the three finalists of the 59th Jaén International Piano Competition, held by the City Council. The Ciudad de Granada Orchestra, under the direction of Paul Mann, will be performing with them during the final, Friday 28, from 19:00 at the Infanta Leonor theatre.

These players have been chosen by the Jury of the contest, presided by Albert Attenelle and whose members are Dag Achatz (Sweden), Susumu Aoyagi (Nicaragua), Jean-François Heisser (France), Benedicte Palko (Norway) and the Spaniards Rafael Quiero, Pilar Bilbao and Pedro Jimenez Cavallé, the Secretary of the competition. The contest started last April 20, with the participation of 39 pianists from 13 countries.

The final performance will determine the winner of one of the oldest and most prestigious piano contests of the world. The first award is getting 20,000 euro, a Gold medal, a diploma, the recording of a CD with Naxos and a 6 concert tour sponsored by the Sociedad Económica de Amigos del País, the Ciudad de Granada Orchestra, the Eusophia Foundation of Málaga, and Ferd. Thürmer of the Thürmersaal concert hall in Bochum, Germany. The second award will get 12,000 euro and a diploma and the third, 8,000 and also a diploma, sponsored by Unicaja.

The German Leon Bernsdorf was born in 1992 and started his formation with Carol Tainton. Form 2007 he continues with Volker Bandfield at the Hochshule Hamburg and form 2010 with Boaz Sharon at the Boston University. Nowadays he is studying with John Perry at the Glenn Gould School. He has won several national awards in Germany, and the first prize at the Steinway International in Hamburg in 2008, the Steinway prize at the Oldenburg International in 2009 and the third prize at the Liszt this year in Budapest.

The Russian, Dmitry Mayboroda, born in 1993, started at the State Conservatory of Moscow and is now studying at the Munich Hochschule. Several awards have been granted to him, making it to the final at the Clara Haskil in 2013. Besides, he has performed with the Wien Philarmonic or the London Philarmonic .

Lastly, Chung Wang was born in 1990 in China, and after studying at the Beijing Central Music Conservatory, he completed his studies at the Manhattan School of Music. He has given recitals in many different countries, and has won many known awards like the Unisa International of South-Africa in 2008, the Villa-Lobos form Brazil, the Animato from Paris and several editions of the Hamamatsu in Japan.

They will interpret Beethoven, Chopin and Ravel in the final and are holding a press conference tomorrow, at 18:00 in the Aula de Cultura from the Jaén City Council, together with the president of the Jury, Albert Attenelle and the deputy of Cultura and Sports, Juan Ángel Pérez. In the morning they are going to travel to Granada to rehearse with the Ciudad de Granada Orchestra, before their final performances on Friday.