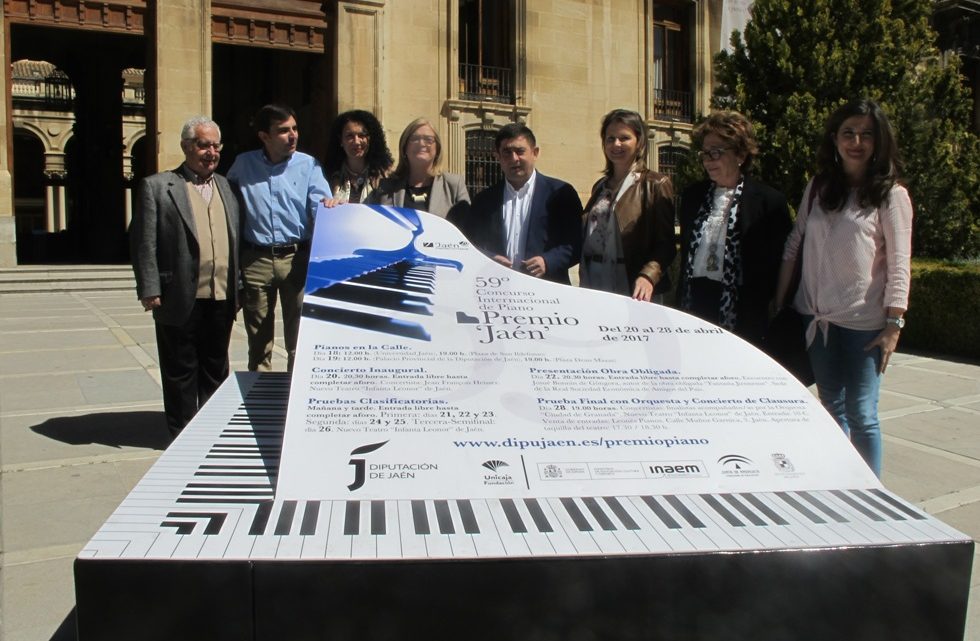 Francisco Reyes presented the contest, held once again by the Jaén City Council, which is taking place between the 20th and the 28th of April.

The 59th Jaén International Piano Contest is starting very soon, especially after the presentation of this edition at the Provincial Palace of the City Council. The president of the institution, Francisco Reyes, came along with the rest of the representatives of the different institutions participating in this event: the delegate of the government, Francisca Molina, the delegate of the Andalusian government in Jaén, Ana Cobo, the deputy of culture from the local government Isabel Azañón and the president of the Fundación Unicaja Jaén, Carmen Espín. Together they unveiled some of the details of this years’ event. It will be celebrated between the 20th and the 28th of April with the participation of 64 young talents coming from 17 countries.

“The great participation shows the international projection of the contest” said Reyes, who also stressed the great quality of the competition, and also remarked that “after almost 60 editions, it is the oldest competition of its kind in Spain”. The celebration of the competition “proves the importance of the institutional cooperation and that the sume of these wills has allowed us to consolidate a prize that gives the province a great national and international exposure”, he finished.

The president continued remarking that “on its almost 60 years of history, it has been won by 21 different pianists, which means that interpreters from the five continents have become ambassadors to our province. This is associated with quality, not only because of the great organization but also because of the repertoire the players need to interpret, most of them by heart”.

Reyes also wanted to stress the evolution of this competition over the years. “We kept organizing and reinforcing the event, and we will continue to do so now that we are very close to the 60th edition, in which we want to achieve something extraordinary”. In the meantime, he wanted to remind everyone of “the iniciatives that have contributed to make the city get involved with its development, like the Piano Marathon”, in which around 600 young players from 22 towns have participated. Other important activities are the street piano concerts that will be celebrated on the 18th and the 19th of April at the City Council, the University and the Dean Mazas or the San Ildefonso square. Not to forget the town concerts on the 26th and the 27th of April, or the meeting with the composer of this years’ compulsory work, Josué Bonin de Góngora.

Finally, he wanted to emphasize the celebration of the opening concert, that will be given by the French concertist François Heisser, winner of the prize in 1974, and also included the “the 52,000 euro budget for the awards, that includes 20,000 euro for the winner who is also giving six concerts in different parts of the world”.

On the other hand, the delegate of the Goverment manifested the she felt “proud that the Spanish goverment is helping to organize a competition of such magnitude, that gives the city a more cosmopolitan atmosphere during some days and that is also great for the city”. She then wanted to “congratulate the City Council for organizing this wonderful event that allows pianists from all over the world to get to Jaén, making a great theatre of the city”.

Ana Cobo valued the importance of this competition too, saying that “the prize has been driving the culture of the city for 59 years until becoming a solid international event. For me, the contest goes way beyong borders through music, an universal language that helps understanding other cultures”.

Isabel Azañón, who wanted to remark that this is a solid and prestigious event, said that “its trajectory is impecable and makes Jaén the pianistic epicenter of the world “. The Jaén Town Council is collaborating giving up the Infanta Leonor theatre to hold the prelims and the final, and also with the Rosa Sabater Award.

In the end, Carmen Espín said that it was “a privilege for Unicaja to help organize this contest once again. “We need to be thankful with the Jaén City Council because it is very welcomed by the people and acts as display for the city. We are reallly glad to be able to invest in this kind of events”, said the president of the Fundación Unicaja.