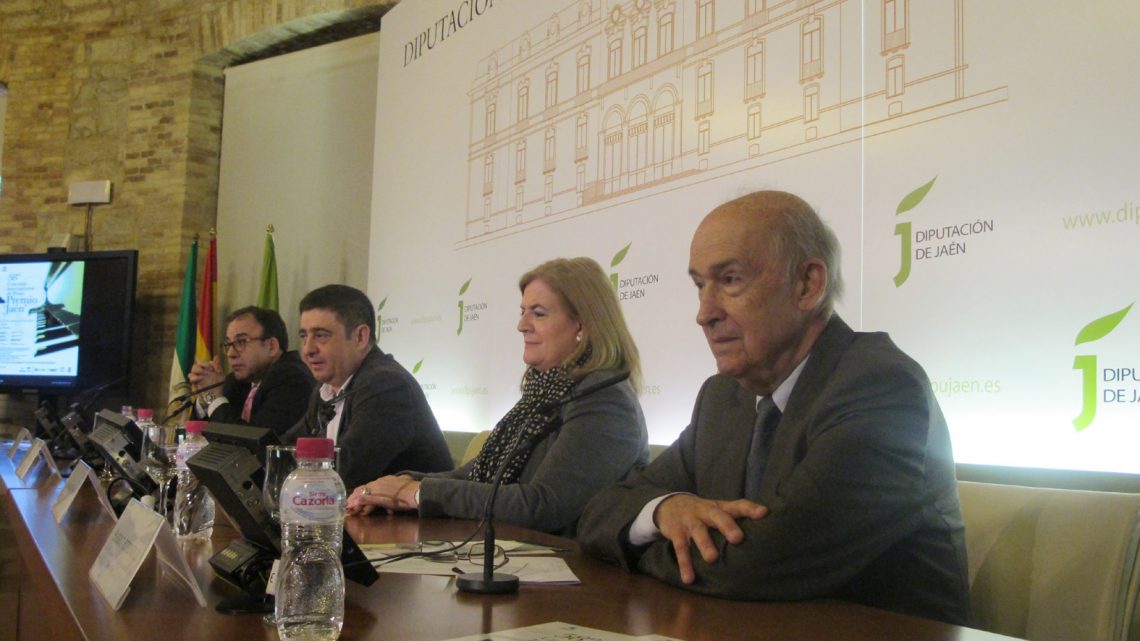 Francisco Reyes is introducing the 58th edition of the competition, held from March 31st to April the 8th, with the concertist Albert Attenelle as president of the Jury.

The International Jaén Piano Contest, sponsored by the City Council, has registered a record at its 58th edition, recieving 74 inscriptions of musicians from 22 countries willing to participate in this event. “This is one of the indispensable cultural activities in the agenda and one of the most relevant and prestigious contests of this modality in the whole world”, said Francisco Reyes, president of the City Council, during the presentation of the competition. Along him were the deputy for Culture and Sports, Juan Ángel Pérez, the councilwoman for Culture, Francisca Molina, the responsible of Institutional Relationships and Communications of Unicaja Jaén, Lucas Martínez and Albert Attenelle, president of this edition´s Jury.

Reyes also welcomed Attenelle, who had already been part of this jury as a vocal in several occassions, reminding that “although this is the 58th edition of the contest, the event actually has 60 years, because it was created in 1956”. In these six decades, “it has become a reference of classical music to an international level, with the result of making the whole province of Jaén really envolved with music and culture in general. Of course, we are very proud of this”.

In Reyes´opinion, “we are talking about the event that has probably made the city more internationally known, getting people from all continents to know our city and our culture”. A success “that is not just a conicidence, it is the result of the prestige that the contest has gained through the years, thanks to a very careful organization, to the amazing talent of the contestants and the members of the Jury, its prices and also its difficulty level and competiveness” finshed the president.

Proof of the relevance of this contest is the high number of inscrptions recieved this year, making a grand record of 74 players under the age of 32 coming from 22 countries all over the world. 14 came from Japan, 11 from Russia and 9 from South-Korea, although we will not know the definite number of participants until the traditional intervention draw before the opening concert, the 31st of march.

The competion is taking place until the next 8th of April, satarting with the intervention draw and the opening concert, given by the German pianist Ralf Nattkemper, who is also member of the Jury. It will be nine days in which” all the piano keys will be playing in Jaén” said Reyes, who also valued the high level of the members of the Jury, formed by pianists from China, Spain, Germany and Romania and that will be chaired for the first time by the Spanish musician Abert Attenelle. He “knows very well this competition because he has already been part of the Jury as a vocal in several occassions, apart from being a wonderful concertist and an expert in contemporary music” said Francisco Reyes.

The Jury will have the responsibility of giving away the 52,000 euro that is granting the prize in total. The first award will get 20,000 euro, the second, 12,000, and the third, 8,000 euro, sponsored by Unicaja. As always, there are also the Rosa Sabater Award, given to the best performance of Spanish music and the Contemporary Music Award, given by the Ministry of Culture, both grating 6,000 euro.

The last award is given to the best performance of the Mandatory Work, composed exclusively for this contest. “This year the work was composed by Manuel Seco de Arpe, professor of Composition at the Madrid Royal Conservatory, who has a great trayectory in this matter. It is entitled “Anamorfosis” and, in words of the president, “it is another composition inspired from the traditional ‘Melenchones’ of Jaén, a reference to the traditions of this city”.

That relationship with the city and the province is one of the most important features in the last years of the contest. “We have put the contest on the streets to get everyone involved and the City Council has made a huge effort in this direction. We believe that culture in Jaén is better understood with this event”, said the president.

“Therefore, we have celebrated a Piano Marathon, getting over 550 students of music schools from all places of the province and we will continue to celebrate piano concerts on the street”, concluded Reyes. These will take place the 29th of March at the Jaén University and the Baños Árabes and the 30th at the Palacio Provincial and the Plaza del pósito. There has been an installation of information pannels in a piano shape in strategic places of the city as well. The event will be moving around many corners of the province through the concerts given by the contestants that will not be able to make it to the last rounds and the composer of the mandatory work will have a meeting with the audience next 2nd of April in order to get into detail on how this work was created. All of it without forgetting the contest Mi Piano, oriented to young piano students from Andalusia.

“All of the supplementary activities are organized to increase furthermore the awarness of this event and are a big contribution to the whole province”, remarked Reyes.

The councilwoman of Culture, Francisca Molina, also wanted to “congratulate the contest on its 60th anniversary and the City Council for the organization. The City Hall is very proud that it brings such joy, music and culture to this city”.

She also highlighted that the competition “has become part of the international agenda”, something which Lucas Martínez, from Unicaja, agreed with: “the prestige and the trajectory of this event is amazing, and the quality of the participants and the members of the Jury grows every year, with an incredible audience response”. Lastly, the new president of the Jury declared to be “very grateful for being given this responsibility, a task that is very exciting in which I will be surrounded by very valuable people trying to reach a fair decision, with the agreement of the Audience as well”. Albert Attenelle pointed that” it is an honour to be the president of this Jury, in one of the most important competitions of the world, the result of a hard work during 60 years”, and valued that” despite the current economic circumstances, the City Council has continued to organize this event. I really think that this is going to be a brilliant edition”.